CONSTIMOCRAZY is a story of Africa weaved by an African poet patriot, a slinger wielding the spear, his pen, against treachery perpetrated by history and its cruelty. The same pen wielder rebukes Africa for frying its own beauty, dignity and morality in copper-roasting furnaces of disgrace and despotism. The African poet patriot traverses with us around, from African natural landscapes, up to the climes of the slave master where Africans are bleached in English syntax and spaghetti culture. The poet and his poetry are an experience of Africa, her story and his story. Though the poet seems intoxicated by pessimistic verbal concoction, the poet patriot does not completely relegate the reader to wallow in pastures ridden by slavery nagana, valleys smitten by colonial whooping cough and pathways strewn by African despotism. The poet is a natural wanderer, a traveller of course. Nsah Mala brings to the fore a dose of optimism as he drags us through mystic endowments of Africa and natural wonders of mother Earth, shifting our minds off from tragedies and economic ailments to the mysterious beauty the earth carries in its belly, especially if it was given more time to heal from scars poised by history and bruises of present-day scuffles. The African poet patriot is a master of word economics and a dexter in carving paradoxical verses. 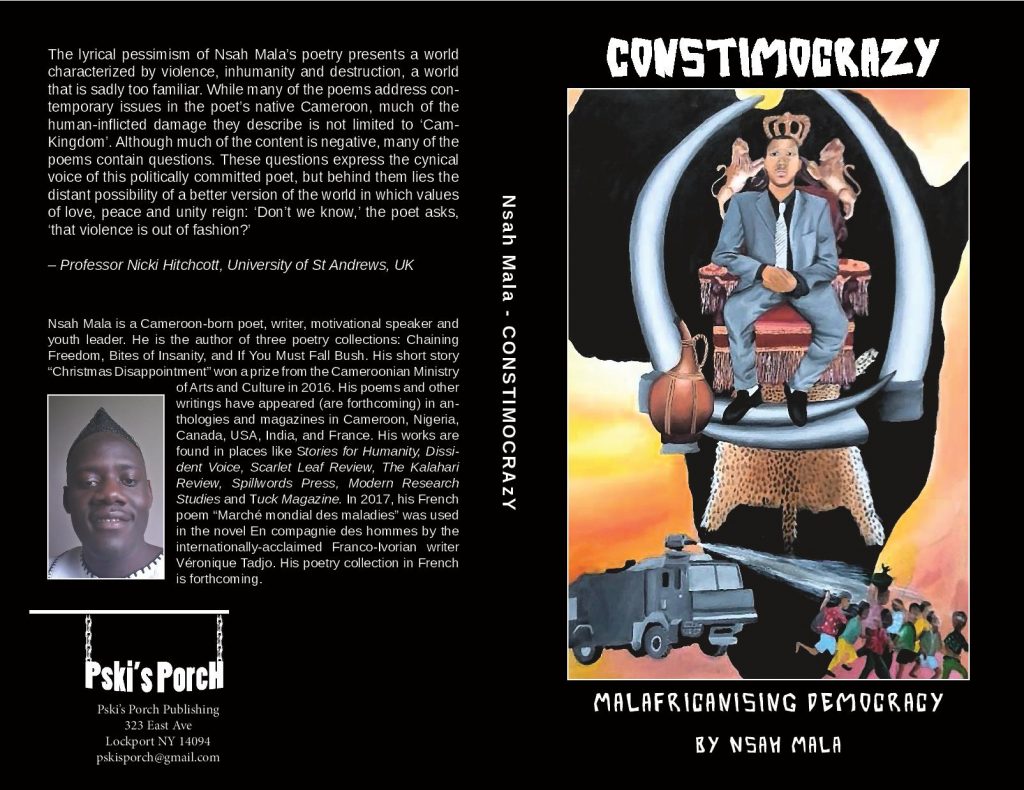 CONSTIMOCRAZY is divided into two parts. This graphical arrangement is supposedly intentional by the writer poet who wants us to follow through his story weaved in poetry like trackers in a journey alongside a great river. The collection is truly great river, whose waters flow both vile and pure: we meet whispering crocodiles, hissing snakes, beautiful fish, gurgling streams, singing birds, dancing mermaids and their rituals, fishermen and their lines, hippos and rotting carcasses, beautiful valleys, gowns of mist, stunning gorges and laughing waterfalls.

Mala interrogates the present day African with a poetic whip in his hand; his pen is his whip. The poem “Refugees” reflects the rot that stinks in the African rondavel: “Out of their abodes, something pulled them: natural – earthquake, flood, eruption, tsunami… man-made – strike, coup, war, terrorism… War and terror are the worst of them all.” The poem grapples with pain, displacement, identity crisis and lack of belongingness. And these are contemporary African crises, which have become generational, even after the calamities of slavery and colonialism. These tragic crises mainly come from within; they are perpetuated by warlords, poor governance, terrorism, banditry, despotism and corruption by the post-independent African leadership. In the same poem, the poet also points out how the angry finger of God contributes to nature-caused tragedies: earthquakes, floods, eruptions and tsunamis. These natural tragedies are not only threatening the African child but also go beyond African borders. However, in Africa they are extremely severe, as they are inherited again from generation to generation due to carelessness, poverty, poor resource management and lack of preparedness and then the refugee tragedy becomes an African totem problem. Mala also reminds Africa to get organized and walk in the path of light as her children suffer as underdogs in alien lands. Most of the poems in the first section exhibit political decadence, economic malaise and moral rot in Africa. In most cases, in the closing lines of his poems, Mala reminds the reader, the perpetrator and the victim that light can still show up if we remain resilient and correct our past hurdles; that we can also reshape our present.

In the poem “Forced into Oblivion”, Mala plays the role of a traditionalist, a griot, a ritualist. He pays tribute to a national fallen hero through a soul-nipping poetry rite. Thus, his role as an African griot, a beacon of religious light. The poem identifies Africa as a hub of religious diversity. Africa is a calabash frothing with super-concoctions of diverse beliefs, traditions and sacred rites we perform for the dead: praises, songs, poems, dances, the animal blood we spill for them and the millet brew we spit on their fresh graves in the spirit that they will rise again to live with us, protect us and be at peace with us. It is again our show of respect to the reputed departed who might be silenced by death but still linger among us. Here the poet becomes a traditional ambassador of his people; he becomes a cultural diplomat who serves the audience with a menu of sacred rituals of a departed family or national hero in his land:

… I trod across seas of dust

to pour on your tomb my buckets of tears

and clear away the labyrinth of aching fears

which have haunted me since you left in 1989

‘coz we did not unfeather fowls on your tomb!

We did not tear family sackcloth after your burial.

We did not tie the gods’ fowl above your corpse. 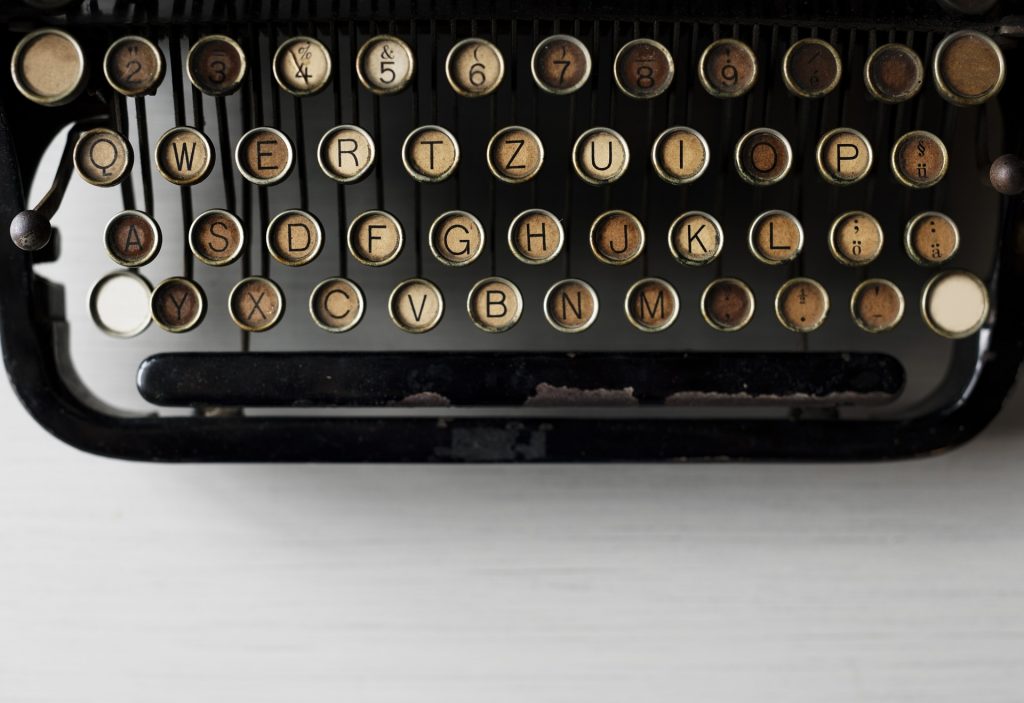 The African poet patriot in Mala also knocks heavily on the iron-buckled doors, whose tenants are dictators, despots and autocrats, through his poem “Sonnet for Dictators.” In this poem, the African poet patriot renews himself into the African word slinger. The poet is candid and brutally honest; his verses know no sacred cow. He reminds despots that they are a minority and they thrive on using the masses to gain popularity and benefit from power. Because of their negative energy extremes, they munch constitutions and they become constitutions themselves. They squash law under their feet and they become law themselves. The poem is rather ironical on its tail as the poet bemoans the absence of Gadhafi, assuming that he was a better dictator who led a rich country while other African leaders drink and suck everything out of their earth – the real dictators. The poet here plays teacher and counsellor. He is trying to rehabilitate rabid African leaders who have since become unrepentant and infected their countries with deadly autocratic rabies, not so easy to heal, and dictatorship has since become endemic in Africa: “After polls, all governments are a dictating minority,// but chosen by and answerable to an electoral majority.”

In conclusion, Africa is blessed to have birthed the calibre of such candid and brutal-honest word slingers and griots of our black continent like Nsah Mala. Africa will never be the same as the poet rebukes the bastardization of Africa by colonial trendsetters. The patriot poet voices against the tragedy of dictatorship, political and moral decadence. The poet Nsah Mala is a true African patriot, a story teller, a teacher, a cultural activist and an overseer of African dignity.

Mbizo  Chirasha,  is the Originator  of  the Zimbabwe We Want Poetry Campaign( www.tuckmagazine.com/mbizochirasha) ,the 100 Thousand Poets for Change-Zimbabwe Resident Coordinator. 2017 African Participant of the International Human Rights and Arts Festival , New York United States of America, a Global Political and Arts Alliance solidarity Member.Chirasha is  a magazine editor ,blog journals  publisher .He  works  as  a  Poet and Writer in Residence, Arts Projects Catalyst and Opinion maker, www.wikipedia/wiki.com/mbizochirasha