If everything is art, and everything is politics, then art is almost inherently political and politics itself cannot and should not be distanced from the arts. The existing political discourse is too often focused on discussions that are not close to home. The arts – or any form of creativity or self-expression – more often than not mirror emotions and perceptions very close to home. We therefore seek to bring the arts to the political agenda, to legitimise its political role, and to encourage artwork focusing on political themes, realities and experiences.

In the words of Boris Groys, “Current discussions about art are very much centered on the question of art activism—that is, on the ability of art to function as an arena and medium for political protest and social activism.” Art activism – or using one’s art as a means for political expression – is a theme central to our time.

Worldwide there are countless groups and individuals active in the political sphere (academically, as activists or otherwise) who have made use of artistic tools, while equally all sorts of artists (cartoonists, film-makers, graffiti artists, animators, poets, illustrators…) use their art as a means for political expression, critique and change-making. In activism for a more critical, just and accessible society, the combination of arts and politics is not unheard of!

It is increasingly frequent that we see critiques of political realities emerging through the arts – think of artists like Banksy (graffiti), The Yes Men (documentaries), Guerilla Girls (performances), John Holcroft (illustrations), as well as various musicians (Bob Marley, Johnny Cash, Joan Baez, Bob Dylan, Nina Simone), film-makers (Guy Debord, Michael Moore, Marjane Strapi, Lizzie Borden) and conceptual artists (Marina Abramovic), who have all voiced discontent through their form of art – their expression. But art activism is not merely critique – it often reflects social, cultural and political realities. This very artistic expression thereof does not only raise awareness for current issues, but also fosters critical political discourse, political consciousness as well as the idea of art as a tool in itself. Using the arts to make a political point is not new – it has been around for a long time, dating back particularly to the 1950s and 60s.

Art transcends linguistic, cultural and political borders, and creates an environment for critical thinking and change. It mirrors what often has no room in election-driven political discussions, yet raises important questions about a sustainable and just future. We seek to identify, encourage and promote this possibility. 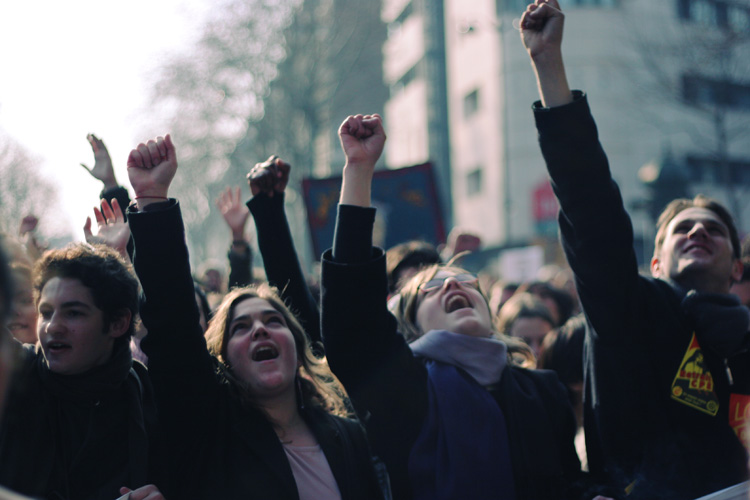 Here are our top 5 reasons for doing so:

Charles Tilly, who is often described as the founding father of 21st-century sociology, once said that social movements are driven by “contentious politics”, ideological conflicts that result in social change. He understood social movements as a series of “repeated public displays” that bring greater visibility to the issue in contention.

In this respect, art acts a catalyst for change. The individuals involved deepen their commitment and understanding as well as discover how an issue affects people around them to develop mutual understanding. The relationships they build establish the sense of community and solidarity that is crucial in a successful social movement. The art created in the process reaches out to people’s hearts and minds, affecting everyone who sees the protest, installation or other act of art. All of this adds up to empowerment of the individual, community and movement. Art, it turns out, really does enrich activism, making it more compelling and sustainable.

Providing facts, figures and graphs is not enough for our advocacy to be effective and reach people in their heads. Studies have shown that facts that disagree with someone’s belief are often ignored and even have the opposite effect of strengthening someone’s preconceived notions.In order to change people’s minds, we have to reach them at a deeper, more emotional level.Throughout history, the most effective political actors have used the arts in their campaigns for social change. While Martin Luther King Jr is now largely remembered for his example of moral courage, a better explanation of the success of his campaigns was given by social movement historian Doug McAdam who described King as “genius for strategic dramaturgy”. From Jesus’ parables to the Tea Party’s protests, working artfully makes activism more effective.

Artwork offers a visual language that doesn’t know any borders

Art and activism are both built on exposing the truth. Art, in particular, can serve as an effective tool to communicate powerful messages across a range of audiences. Linguistic and cultural barriers often divide us, but everyone, regardless of what language he or she speaks, can feel the emotion. That is why tapping into emotion is central to translating these ideas across all the barriers that divide us.

There’s no convincing anyone with art. You just see, and to see is to experience

One of the most challenging parts of activism is not only to grip people’s attention, but what is more important is to inspire people to action. Nowadays, with the ever-increasing amount of information we are faced with every day, this is an increasingly hard thing to achieve. And that is when art comes into play. Successful art cuts through apathy, imploring the viewer to look deeper and explore the narrative to give them time to stop and think.

“It’s always safer to stay with the status quo and not make any waves. It’s safer to let things happen and not raise your voice.”

Without a doubt, neither artists nor activists are prone to taking the safe road. There is no day without facing and overcoming inherent risks.

“Risk is a large part of making art. What you’re doing is essentially opening yourself up and putting your thoughts, ideas and way of responding to the world on display for people to come and look at.  You don’t know if people will embrace it. It is the same for artists and activists: there’s a compulsion. There’s this innate drive to do what it is you need to do. We have to react, so we get over the fear of failure.” (Aaron Staples)

We are not alone in our claims and endeavours.

We asked some of the leading European academics in the field on their opinion why the intersection between arts, politics and activism is a vital one in our day and age.

General quotes on arts and politics

“There is a distinction between art and science, in that art is meant to be personal.  With all the information in the world that has been generated in the name of curiosity and human interest, the best form of communication still involves the arts.  This is true for political science as well as natural science—the arts are the very best way of involving people.”
– Daniel Helman, PhD – Prescott College

“Art is politics through emotions! Politics is the art of channeling those emotions into applied policies. It is the art that foresees, causes and shapes political changes from the very beginning of human kind. Through arts and politics individuals share common believes, values and goals. It is their pairing that brings the best out of humans in terms of compassion, solidarity and empathy. Art is the set of activities that makes us literally humans – creatures capable of using their imagination to portray and explain the surrounding environment in order to achieve better understanding of it.“
– Lyubomir Stefanov, PhD – New Bulgarian University

“Arts and politics are two facets of human sociability, the latter concerns the organization of society while the former is a representation of the life of the polis: social customs, given values, current conflicts, etc. Arts and politics are separated but, depending on the particular esthetic product, the division is porous to different degrees. Sometimes a rather watertight demarcation is raised between arts and politics, and sometimes this wall is straightaway perforated. In any case, the arts are a unique voice that – if it is heard – can add to our knowledge of social life just as it can be a source of political critique.“
– Pr. Julio Hans C. Jensen – University of Copenhagen

Quotes on power and authority

“In our times of post-truth politics where reality takes “secondary importance” and hysterical propaganda and political engineering of a worst kind overtakes political discourse by narrowing it and closing it to targeted social strata to achieve Pyrrhic victories, the intersection of arts and politics becomes crucial, as artistic expressions in all forms remain one of the main channels for democratic provocations of such reality. Artistic expressions challenge, provoke and constantly question imposed “authorities of the day” and keep freedom of alternative expression alive, thus serving vital democratic function regarding civic liberty and pluralism“.
– Dr. Kiril Avramov – New Bulgarian University

“Today’s ‘artivism’ explores not just alternative ways of seeing, but also alternative ways of living, working, building economy and performing the self in the society. What is more, both the anthroposcene and the arts scene have changed so rapidly and profoundly that people are utterly confused. While party politics, mass immigration and environmental issues seem to be out of the control in terms of irrational and affective populism governing the courses of the EU nation states, the art museums have started to attract increasingly numerous masses which is making them the new sites for democratic pastime where people from all walks of life no matter of their education, age or political background come together to muse over critical, intellectual, queer, transnational and radically political issues – a good example of this is the extreme popularity of the  “Night of Philosophy” event in Kiasma, or the Hatoumi, Modigliani and Kusama exhibitions’ unforeseen success, all organised in 2016 in the major art museums in Helsinki.“
– Dr. Max Ryynänen and Pr. Sorainen – University of Helsinki

Quotes on globalisation and capitalism

“While this is not the sole preserve of art, it is in artistic practice that we find the model for interventions in the world that can sustain practices of resistance against the deadening consequences of global capitalism. To the extent that we are able to adopt the artistic paradigm in our practices of resistance, then such practices have the potential to challenge commodification and subjection from within – by traversing the entirety of the system’s organisation from the perspective of its emergence in order to create counter-processes of exchange and valorisation.“
– Dr Iain MacKenzie – University of Kent

“Contemporary is something that doesn’t give itself to us in the form of perception (phenomenology) or information (natural sciences). It is only grasped through setting in motion simultaneously of fiction, form and function. These words sum up the crucial crossing between arts and politics and through Hegelian speculative logic that explodes the logic of predication, it reads as follows: The becoming political of art is the art of politics in the becoming.“
– Pr. Taneli Viitahuhta – University of Jyväsklä

“Adorno argued that every artistic creation originates in the empirical reality from which it tries to break  free. Politics conditions the reality from which aesthetics enables us to break free. Without political constraints, we would be unable to savour freedom.“
– Pr. Rebecca Gould – University of Bristol

“It’s time to take Hölderlin seriously, not ‘merely’ as a Poet, but as  the most empirical of scientists, when he observed that ‘Was bleibet abter, stiften die Dichter’.“
– Pepijn Van Eeden, PhD – Université Libre de Bruxelles