We are extremely proud to announce the publication of the second issue of the International Journal for Arts and Politics (IJAP), edited by Jasmin Lilian Diab!! 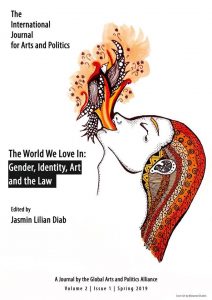 You can also find IJAP – Issue 1: The Public, the Private and the In-Between: Women, Movement, Expression and Change (Spring 2018) here.

(c) Copyright GAPA, all rights reserved. Please do not share without permission from GAPA.

The GAPA Think Tank is made up a group of esearchers who write and publish essays under the supervision of our lovely editor, Ms. Jasmin Lilian Diab. To contribute to the International Journal of Arts and Politics (IJAP) and to find our about current opportunities in the Think Tank, email Jasmin here.

The thematic clusters below provide a tenative framework for interested community members. We have identified six themes that occupy the social and political discourse. These topics are also particularly prominent in many forms of political art. We encourage an academic, politically informed perspective on these issues – drawing connections to the world of art activism is more than encouraged.

Migration is commonly defined as the movement of people across political borders with the intention of settling temporarily or permanently in the new location. According to the UN (2015), 244 million people or 3,3% of the world’s population lived outside their country of origin. Particularly since the onset of the refugee crisis, migration and the issues surrounding it have dominated the media, politics and discussions about the best way to react to it.

Walt Whitman (1855) in referring to identity said “we contain multitudes”. Identities are what make us different from others in terms of beliefs and perceptions – they occur on the individual or on the group level. There are many ways in which they can be conceived, for example in terms of culture, religion, tradition, nationality, sexuality, or politics. Identities have been the source of many conflicts on what is “right” and “wrong”. On the other hand, they have also enabled expression and self-realisation.

Consumption is the act of using up goods or resources. While some acts of consumption are necessary for survival, others are arguably not. Since the development of industry, the division of labour and the onset of capitalism, consumption has become inextricably linked to consumerism – which can be analysed in terms of consuming material goods, but also cultural goods. Societies worldwide are seemingly turning into consumer societies, with consumption as the highest priority.

Civic participation refers to how citizens address and contribute to issues of public concern. Civic participation is not only about voting, it also involves other ways of getting involved in shaping the future, like through running for office, organising protests or raising awareness about an issue. These forms of participation in the political discourse are considered to be vital for the ongoing development of society in a direction away from the status quo.

Conflict in an international context is commonly understood in terms of a war between states, usually for territory. Increasingly over time, such wars turned into broader conflicts about ideas and ideologies. The most prominent example of this today may be the “war on terror” and increased efforts to combat the rising power of extremist groups – which has arguably produced a variety of negative consequences and given rise to a variety of concerns.

In a political context, the study of the environment has been focused the relationship between human society, ideology and the environment. Concerns for the welfare and future of planet Earth have become increasingly politicised in recent times. The issue of global warming and climate change has fuelled discussions about ways to combat this development politically and economically, for example through sustainable initiatives and international quotas on greenhouse gas emissions.

Possible sub-topics include but are not limited to: