Ever since Burning Man moved away from the shenanigans of the San Francisco-based Cacophony Society towards the creature it has become today, the ghost of perceived political agenda has haunted Black Rock City (BRC). This particular phantom, summoned by journalists, critics, politicians, Burners, and even the FBI has convinced many that Burning Man has (or should have) a political message and agenda. I too had been convinced. Going into Burning Man for the first time this year and with the rapidly approaching US federal elections, I expected to see plenty of politics themed art cars roaming the Playa, lectures on the evils of capitalism, satirical politics-themed costumes, and a general desire to create a socialist utopia in the middle of the desert. What I found was none of that, and all of that.

In preparation for my trip to BRC, I was a good little Burgin and did my homework. I spent many an hour pouring over Youtube videos, blog posts, check lists, Facebook posts, and the official Burning Man website. There were quite a few news articles about the political nature of Burning Man, past art pieces with blatant political messages, and even articles in the Burning Man Journal that discussed the political/non-political nature of the festival. It seemed that, generally speaking, those inside the community rejected the idea of Burning Man being political, while everyone else saw it as a hotbed for liberal political scheming.

From what I saw, I tend to agree with those in the Burning Man community. Other than a few casual discussions with people about the upcoming elections and an anti-Trump rally (which I only heard rumors about and never actually witnessed), I saw no reference to politics. But really, this makes sense. Burning Man was never meant to be a political gathering of any kind. The festival is run with the 10 Principles at its heart, none of which are inherently political. Instead, as Caveat Magister succinctly put it “Burning Man absolutely does not stand for any particular political program precisely because those things it does stand for place the lived human experience over political theory.” It is a festival that celebrates humanity and creativity in all its forms rather than any political ideology. 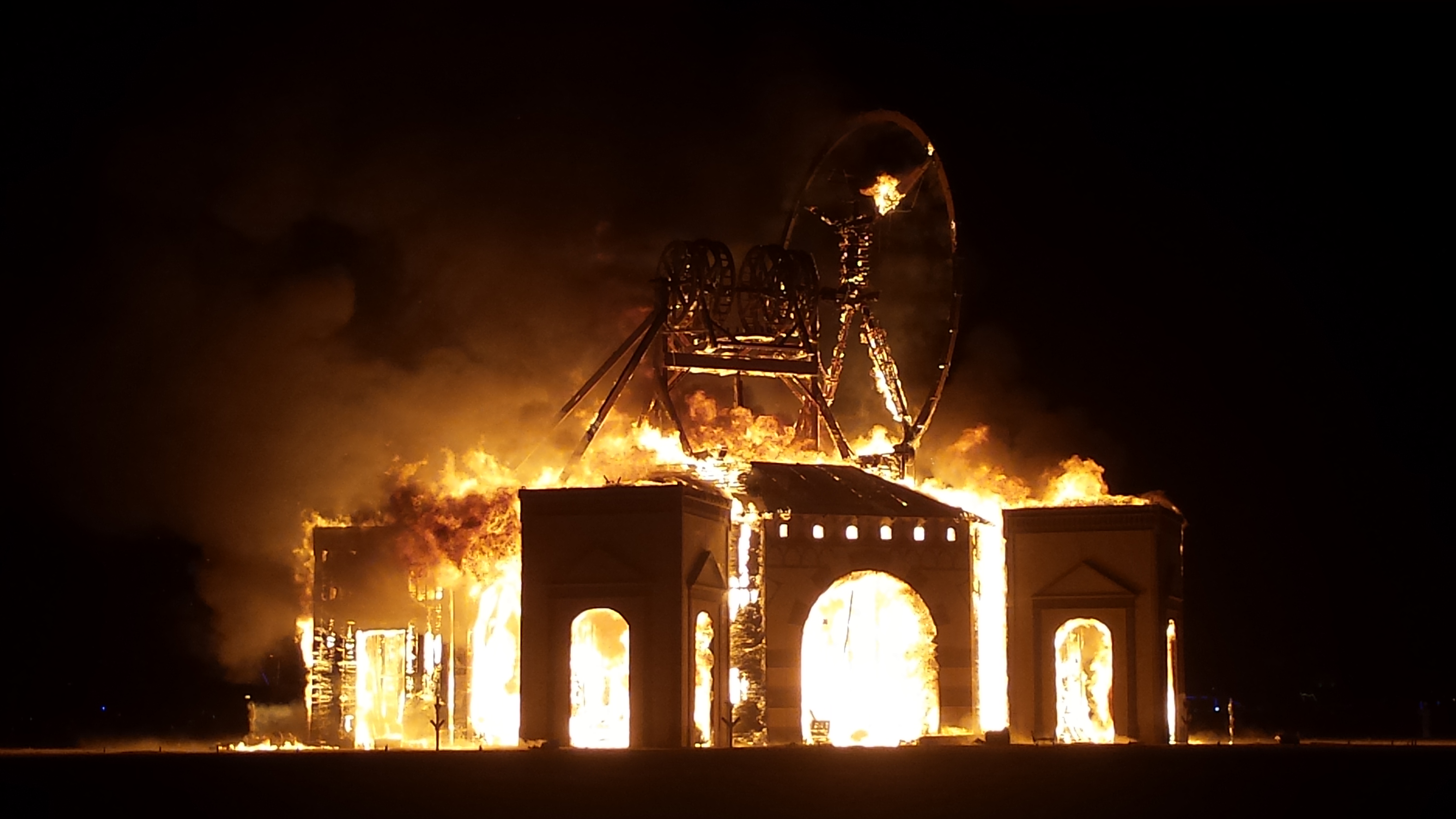 All of this being said, the deeper I venture into the Burning Man community, the more I can see that there is, indeed, a bit of politics lurking in there. This may not manifest in the traditional sense, e.g. with outright exercise of political expression, but rather surfaces in the actions of Burners and the Burning Man organization (BMorg) as a whole. The BMorg has made a point of including members of the local Native American community in the festival, a type of political negotiation in and of itself. Burners without Borders, a Burning Man affiliated organization dedicated to expanding the 10 Principles to the wider global community and providing disaster relief, supports community engagement projects that could be seen as spreading Burning Man’s own particular brand of politics. This may not be politics in the traditional, hard, pure partisan sense, but it is a type of political and social engagement nonetheless that still gives Burning Man a particular political flavor.

What really makes Burning Man a pseudo-political festival, however, is that damn spirit of perceived political agenda imposed on it by those outside of the community. According to social identity theory, the identity ascribed to the self by others is just as important to identity construction as self-identification. The fact that journalists, politicians, and others continue to try to stick Burning Man in some sort of political box will always give Burning Man a political character, whether it likes it or not.

No, Burning Man is not a place where liberals go to make plans for the next big attack on conservatives or capitalism. It is not a socialist utopia and it is not some nefarious creation meant to distract liberals from making “legitimate” political and social change. It is a place for radical self-expression, artistic exploration, and community. However, as long as people continue to discuss Burning Man in the context of politics and those few Burners participate in social or political change (on or off-Playa), Burning Man will always be haunted by the ghost of politics. 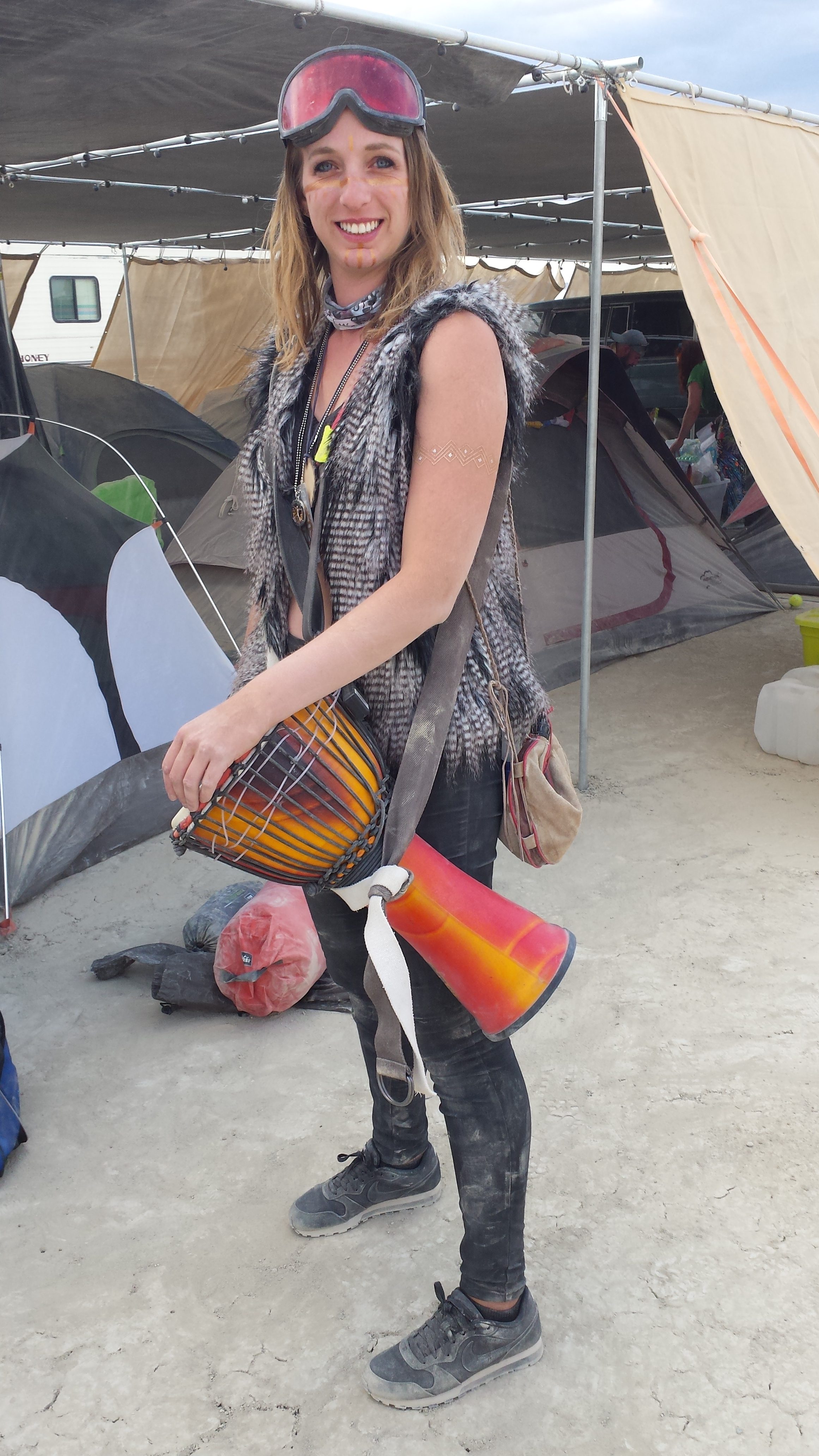 Kelly at Burning Man this year

Never been to Burning Man and thinking about heading there yourself? Well darling Burgin, here is a quick introduction to the jargon to help you on your way:

For more information on Burning Man in general, check out their official website here: http://burningman.org/.