I must confess my guilty secret. I’ve never protested. I feel fake when I shout out about an indignation or a societal wrong that should be put right. Even though I lean towards the left and dream of truly fair wages and work practices across the world I have yet to galvanise myself into action.

While studying for a degree at the age of 42 (a protest in itself), I could see that many of my ideas, dreams, arguments and dissatisfaction towards the world were channelled into my writing. I always admired the staples; Brave New World, 1984 and Animal Farm, but could see how these books were now antiques of the past. They were books to be read, closed, discussed and then forgotten. “Big Brother” was a term taken from 1984 and turned into the title of a glitzy celebrity programme heralding the arrival of a sexy surveillance society. I wondered if I could write another book that mirrored the changing world around me and that would make the reader look up from the page and realise how close we were to losing our cherished freedoms.

Once When We Were Human is part homage to the aforementioned classics and part warning of the world that is quickly approaching – with Britain after Brexit now leaning towards the right and alt-right and Trump in the White House, leaning in a direction we have yet to imagine. The so-called “liberal army” might ask themselves how we can defeat an aggressive ideology hell-bent on destroying freedoms only recently established?

How much would you put up with before you act?

Once When we Were Human is an animal allegorical tale. The world has been divided between the wolves our masters and the rest of us the dogs. Justin, the protagonist, is relaxed as totalitarian measures are voted in, in exchange for an easy working week and free food. Any dissent is immediately crushed and people are “voluntarily” sent to re-education camps or summer camps. Karl is the antagonist who, as a conceptual artist, upsets the status quo with his challenging art now deemed illegal by the state.

The book takes parallel themes from the rise of fascism before and during Word War II and asks  how these things could occur in modern times. Justin is the book’s apathetic character who asks the question, “How much would you put up with before you act?” The education camp Sunshine Valley acts as a microcosm in a world where we can have all our material goods if we surrender our creativity.  This allows the story look at the importance of creativity in the human spirit through the eyes of Karl. There is the experience of the surveillance society and education lessons designed to brainwash its citizens, and also a mock funeral for those deemed too elderly, that asks further questions about the dangers of euthanasia. The way we can dress up a horror to appear as an act of compassion.

As I reflect on this story months later. I see deeper meaning in the roles of Justin and Karl. The latter a fearless creator. The other fearful of his own power subdued by the oppressive environment around him. Karl is the God-like creator much like the artist prior to the creative act. An artist sits poised with a blank mind waiting for an idea to form. The idea forms and takes shape on the canvas.  The formless moving into the formed. The other characters while less in presence provide food to the varying arguments in the story.

In a totalitarian society, its people can never truly be free, and therefore can never truly create. This means a totalitarian society will only ever reach a fraction of its true potential. So China can never fully be China, as long people are oppressed, and the same goes with Russia. Fundamentally these systems are closed systems and closed minds. The West is also in danger of losing its creativity as it imposes draconian spying measures it has to bring in to protect itself from its own aggressive measures abroad.

With the death of creativity read the death of business, of art, of economies, of the Facebooks and Googles; and as we speak the death of the human spirit. The future may look bright and shiny but we will be dead inside without our creativity. 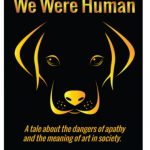 David Swan worked in technology for 15 years before deciding to pursue a Creative Writing degree at Bangor University. He has travelled to many different countries such as Nepal and India and he has worked in Holland and China. He also has an interest in Zen and Tibetan Buddhism, but has taken a break in the “need-to-believe-in-things” for now. David has had one of his short stories published in Philosophy Now magazine and is now looking for a home for Once When We Were Human. He hopes that, in addition to making a living from his writing, he can make people think, feel, and commit to action.