We are starting this 2017 with an interview with artist and activist Magda Fabianczyk. Living in London but originally from Poland, she has been working with socially engaged practice – from food performances, direct actions, collaborations with local artists whom she met during international residencies to engagement with minorities.

She has worked with Roma and local authorities in Bytom, Poland; Chechen refugees and their Polish neighbours in Lublin, Poland and her Bengali neighbours in London. Her work explored the artist – non-artist relationship through We were trying to make sense… , a publication she co-authored. She previously worked with people who found themselves in a situation of conflict that emerged from the lack of openness to difference and also with those struggling with internal conflict as part of their recovery from substance abuse. Her work often engages people whose rights are under threat, such as Roma who experienced racism in Poland or Polish women fighting for reproductive rights. Magda’s projects are multi-layered, manifesting in video installation, sound, film, performance, direct action or publication. 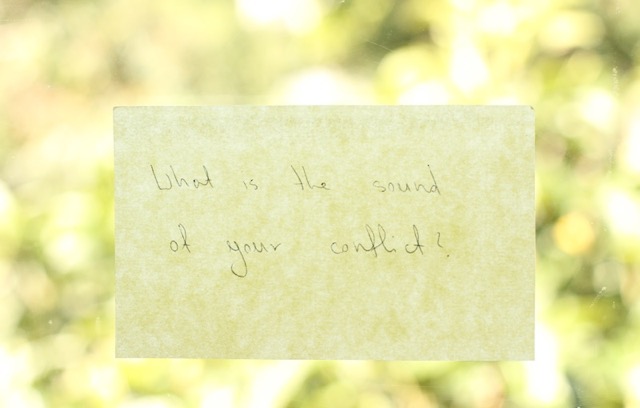 Magda, how do you choose what to engage with and who to involve in your projects? It seems that a lot of your work came about spontaneously – by exploring the area you are residing in.

M: I’m interested in situations of conflict that come out of misunderstanding of social and cultural behaviours, so when invited to take a potential residency I take research in that direction.  I used to work on collaborative projects in India, after which I initiated a project on a social housing estate in East London, where I ‘inserted’ myself as a neighbour into the local community, which was mostly of Bengali origin. I stayed there for several years. Through creating shared experiences in an intimate space of my flat, where my Bengali neighbours and my artists’ friends (who were mostly from Western Europe) met, I tried to blur mutually present stereotypes.

M: Narrative mediation is a very particular form of mediation, which proposes that people perceive reality through the prism of their culture and previous experiences, assigning particular meanings to what they see and creating narratives, the exclusiveness of which may lead to conflict. It derives from social constructionist theory and it’s a way of resolving conflict (and understanding it as a natural element of social relations) without assigning blame, and where both sides work together to create new narratives, free from conflict. One of the main techniques used is to externalise conflict, which allows attention to be moved from people in a conflict to the situation of conflict and helps to pave a way towards mutual understanding. I used it a lot when working on Not black and white book to understand what were the real reasons behind the racist behaviours against the Chechen refugees in Lublin, Poland. 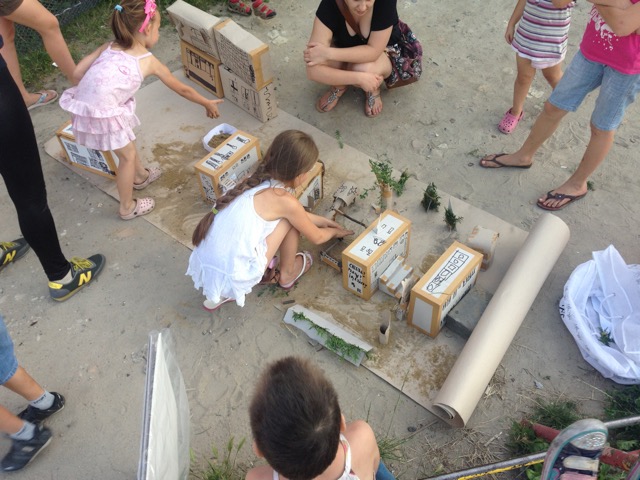 Exclusion was the core of the problem in that area– there was an exclusion of the Chechen minority by their neighbours, even though the neighbours themselves were excluded by the local authorities from other parts of the city, placed in the terribly maintained social estate and then stigmatised as lazy criminals. Initially I worked with Poles and Chechens separately, but the project slowly created space for communication. I believed that it was the lack of exposure to ‘otherness’ in Poland that was partly responsible for the resentment or even hate towards the ‘other’. I thought that I needed to lead the work to a point where people could actually meet and discuss their positions with each other. When we all finally sat together at the table, during a meeting organised in a friendly local restaurant, emotional confrontation emerged. It was a turning point in the project that led to other events and finally to a friendship between a Polish family and a Chechen man. I was however not interested in forcing friendships, as it was also clear that the two communities came from very different social backgrounds. The project was more about creating a space of acceptance.

It seems that you are very interested in lives of ordinary people you meet on the way – you find meaning in every new encounter. Do you care more about the process of your artwork or the result?

M: The main outcome of my work is always aimed at bringing new understanding to, and shifting, existing social relations. Dialogical processes that I engage my collaborators in are crucial for that shift to happen – this is where a lot of negotiations take place and the result, the physical object we create as part of the process, is an outcome of this negotiation. What form it takes is important, because it maps whether the process was successful or not. It also needs to speak to the art audience.

How do you comment on the relationship between art and politics?

M: I was definitely influenced by the concept of agonistic pluralism, that Chantal Mouffe writes about and as part of my practice I try to create space where ‘differences can be confronted’ and discussed but not eliminated. I recently reread one of Kester’s texts, he writes that ‘It’s necessary to begin again to understand the nature of the political through a practical return to the most basic relationships and questions; of self to other, of individual to collective, of autonomy and solidarity, and conflict and consensus…’ which is exactly what I’m hoping to do through We Hybrids projects that I’m currently working on with Ioli Tzanetaki, curator and my ex-classmate from Goldsmiths University. I wish my projects could invite people to reflect on the political choices they make every day and how these decisions affect others. Is it really the way they anticipated? What would it mean to behave differently?  Here I also think of Karen Mirza and Brad Butler’s work, who I learned a lot from. They talked about the act of withdrawal. What does refusal to participate mean? It could become an  act of resistance, but when it turns to silence it can also become consent towards injustice. The project we are working on with Ioli examines these positions.

In Premise-There is no end to the story about the artists from America and India, women in the video sing the following words: Together as artists, we are brothers. Does that mean change is possible through art? Do people need to be united in order to change something?

M: As artists we need to constantly ask questions, such as: ‘is the change needed?’; ‘what sort of change do we want to initiate?’; ‘who will be affected?’; ‘how do we understand community?’ and so on. Engagement can happen in many different ways and artists can address problems that exist on a variety of social or political levels, but I believe it’s necessary to always doubt our capability to comprehend the complexity of the situation we are working within and keep questioning ourselves. This means operating on a slippery ground – dealing with feelings of insecurity, stretching our perception and a lot of negotiations. If we want to create sustainable projects, where initiated by the artist processes continue, we often need to work closely with local institutions, local activists and so on… They all need to be committed and work ethically, self critical… self reflective… 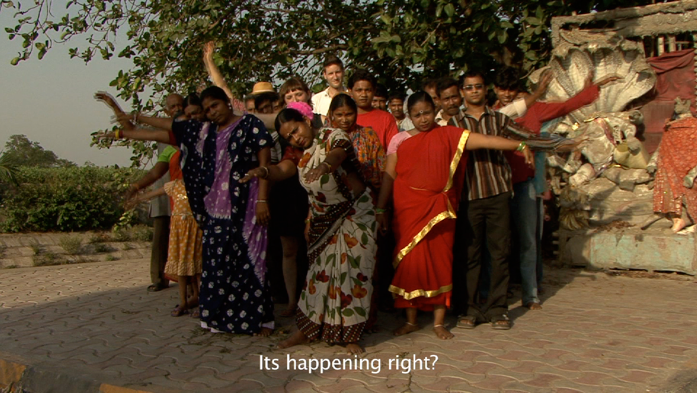 I work very closely with people who are not artists, who have often found themselves in an economically vulnerable position, and might have been misrepresented, stigmatised or had their rights or body violated. Many of them have had a bad experience of social services and think of art only as figurative painting or sculpture, so I need to allow a lot of time to build trust and to find a mutually comfortable way of working.

The project you mentioned took place in India, over two separate visits. It was very complex, because of the postcolonial context we were working in and also because we came from two different creative backgrounds – contemporary art and folk art. We set about challenging the hierarchies that these differences produced. It was that process of ‘pushing against’ that opened for all of us new possibilities of making art together and shifted the dynamic of the group.

You are currently studying the MA Art and Politics at Goldsmiths, University of London. How did the academic experience affect your work?

M: I needed to take some distance and reflect on my practice, which academia gave me. The course I took was within the Politics department, I was not interested in an MA in the Arts. At Goldsmiths I met people who had long histories of activism, international relations, performance, which helped me to renegotiate my position as artist.

In the project Arrival / Departure / Return you are discussing what the UK border meant to coastguards, lifeguards, café owners, lorry drivers, hotel receptionists, all living in Folkstone, Kent, as well as tourists. Do you find similarities to the perception of the border of the current situation in UK after Brexit?

M: In some cases, the power dynamic shifted. I remember talking to a young man from one of the EU countries, when looking out into the sea.  As an EU citizen he was allowed to live and work in the UK. He felt safe. On the opposite side of the English Channel the refugee camp was being demolished. He didn’t think refugees should be allowed to enter the UK, he thought of them as illegal and not wanted. Today, after Brexit, his own position in the UK is under threat, and he might become ‘illegal’ himself.

To  end, can you reveal to us a small curiosity from one of your performances- in Edible Interventions you and other artists cooked a ‘democratic soup’- what did it look like and most importantly, how did it taste- sweet? Bitter?

M: (laughing) It tasted like a typical Italian lentil soup! Edible Interventions were a series of interventions into existing residencies or exhibitions. Democratic Soup was a ‘failed’ attempt at democracy in the kitchen, as the artist, whose residency I interrupted and who also happen to be a good friend of mine and an exceptional cook, shut down almost every attempt to modify his family recipe. We had a lot of negotiations going on at that table. I later discovered an act of conspiracy.

Find out more about Magda and her work on her website: www.fabianczyk.com

Picture credits (in order of appearance)

– ‘Different Weathers of my Body’, 2013-2014, London, UK. The question was asked as an invitation to participate in the collaborative project. Fot. Magda Fabianczyk

– ‘Not Black and White Book’, 2013 – 2014, Lublin, Poland. One of the workshops with Polish and Chechen children from Wrońska street in Lublin. Fot. Magda Fabianczyk

– ‘Premise – There is no end to the story about the artists from America and India (x3)’, 2010, Kolkata, India. Still from the film, collaboration between Patachitra artists (West Bengal) and Transiton Collective (UK).

– ‘ Where I Was Not’  2013 – 2014, Bytom, Poland. The table was used to host a meeting between Roma representatives and the local authorities at CSW Kronika in Bytom.  English translation of the  text – words of a young Roma woman: ‘ I have a dream to go where I have not yet been. Fot. Magda Fabianczyk