Unite Against Dividers was a weekend event featuring lectures, debates, and activities that all circulated around arts involvement with politics post Brexit and post Trump. Though it was spread out over the weekend, the majority of the seminars/debates were fit into a Saturday that I attended. The day comprised a selection of speakers from all different ends of the arts communities involved in politics. The aim was to open broad and varying discussions about both their experiences and what we can and should do next. A virtuous effort coordinated by Kathrin Böhm, Rosalie Schweiker, Divya Osbon; Harriet Kingaby and Beth Bramich.

The venue was easy to find, and I was quickly welcomed by a large desk set up by the entrance, where a women helped me with my introductory booklet outlining the day and providing a name tag where I was to write my name and preferred pronoun. I felt this was a great start to the day.

Opening with a complimentary breakfast and beverages, I arrived towards the end of it. So I went for the coffee and just started walking up to the closest group of women to try and start talking to. Fortunately (or unsurprisingly?) they were very friendly and wonderful to talk to. 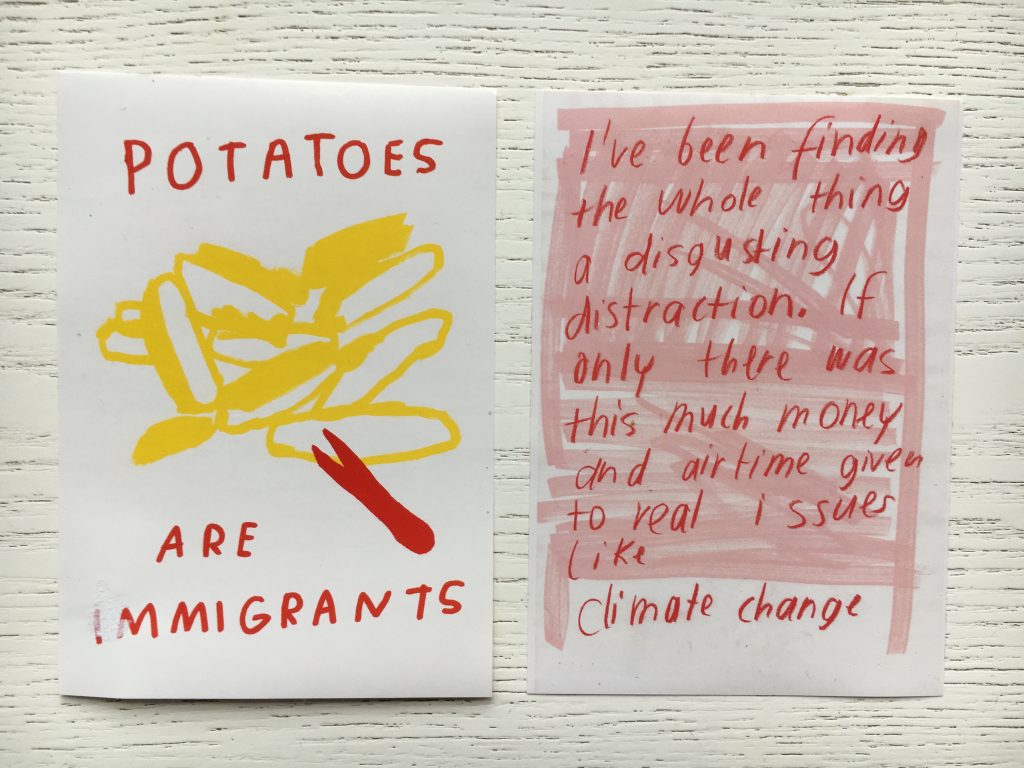 The large group began in a large abstract circle, with a brief overview of the day’s events, and then a quick game to “break the ice” (run around the room until told to stop, then with the closest four people you make a group… and you must find two things all four of you have in common… and then sit on the ground squeaking. The first team squeaking wins). Half my team I ended up gravitating back towards to for the rest of the day, half I happily avoided.

I was slightly concerned about the mobility of each participant, as the game seemed subject to young mobile participants. However one of the winning contestants was a woman seemingly in her 70s.

Also, I should add, the organizers prearranged several people who had volunteered to be “listeners” who would be there to listen discretely to any issues or complaints about the day and act as neutral personas between the participants and the organizers to raise any such matters. The “listeners” wore subtle badges as markers.

I chose “How Arts Can Get Involved In Politics:

For people who want to talk about artists agency and function in political processes.”

Opposed to “How Can Politics Get Involved In Art?” and “A solution Lies in Salt and Spice” run by The Matatu Kitchen

The main speakers introduced themselves and their ethical and progressive programs, what specifically they have been doing to combat the damaging affects of current global politics.

Miguel Amado was a standout, focusing on developing work that connects to people’s needs. He spoke of the reality of living in the echo chamber of cosmopolitan London and the apparent disconnect between the city and the rest of the country. He proposed using the art museum as a space in which we could reinvent the civic space, more about dialogue and connection, and thus leaning closer towards a community centre. In this vein, he runs a day of activities titled “Community Day” for free, targeted at groups such as asylum seekers. Reaching out to both communities and individuals is essential to facilitating this connection. This opens the exhibition space to a much broader audience than those just, wishing to view fine art. 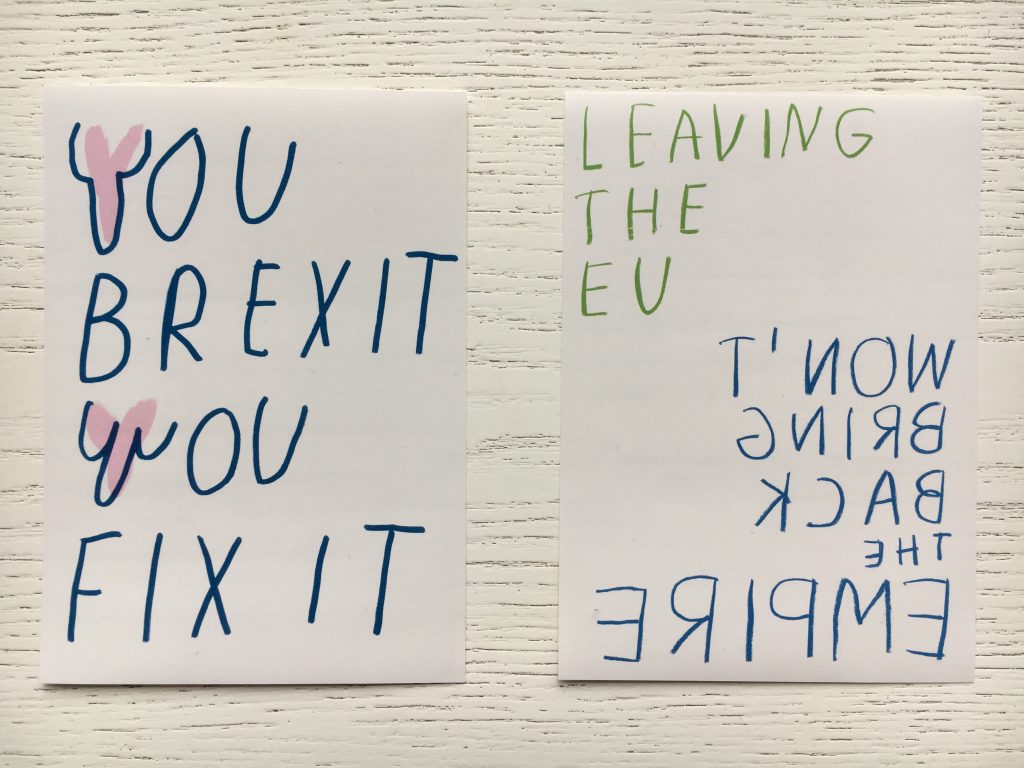 With everyone relaxed after the first series of lectures, it became easier to talk to about the day so far, what lectures people had attended and how they felt about them. It was great being able to talk to many of the speakers who mingled with the guests during the break; it felt like a nice reflection of the theme of openness and inclusiveness of the day.

“How Can We Talk To People We Disagree With?” -“For people who want to use their communication skills to facilitate different (visual) Languages?” This was seemingly the most popular lecture of the day.

“Talk with Alicja Rogalska”  -“Talk about her experience of collaboration and participatory projects with different groups internationally, supporting various struggles and making art in the process. “

I chose to attend, “How Can We Contribute To Existing Organizations?” -“For people who want to support, infiltrate, investigate existing organizations and join forces. “ Featuring Migrant Voice, Alice Westlake from ‘1 Day Without Us London’ and Richard Whitby from Artists Union England.

Fozia (of The Matatu Kitchen) objected to one of the speaker’s talks, about ways in which to get the general public to engage, saying, “I don’t think people will care”, and that we mustn’t solely focus on highlighting issues but also figure out how to deconstruct the entrenched the ideas of nationhood and how this constitutes ‘Britishness’. She stated that this perception of Britishness is tied up in outdated ideas of British identity and a desperate gripping to old notions of empire. This parallels the sense of entitlement that Trump represents in “Make American Great Again”. America was never great for many individuals.

The discussion moved on to “who defines migrants?” Or who even identifies himself or herself as migrant? (E.g. somebody who is from northwest England compared to somebody from another large European citizen, who feels more at home in London than an English-born citizen?).

Another women stated the need to also focus on the struggle of shifting ideas from social media into physical reality. (And problems like clicktivism, where the general public feels like political activism and social justice has been instigated after simply ‘liking’ politically inclined feeds) She also emphasized, how do we work with ‘us and them’ and how can we change this?

We need a radical re-shift in the way we think about identity, scrutinize further issues of representation, and question who is setting the agenda? 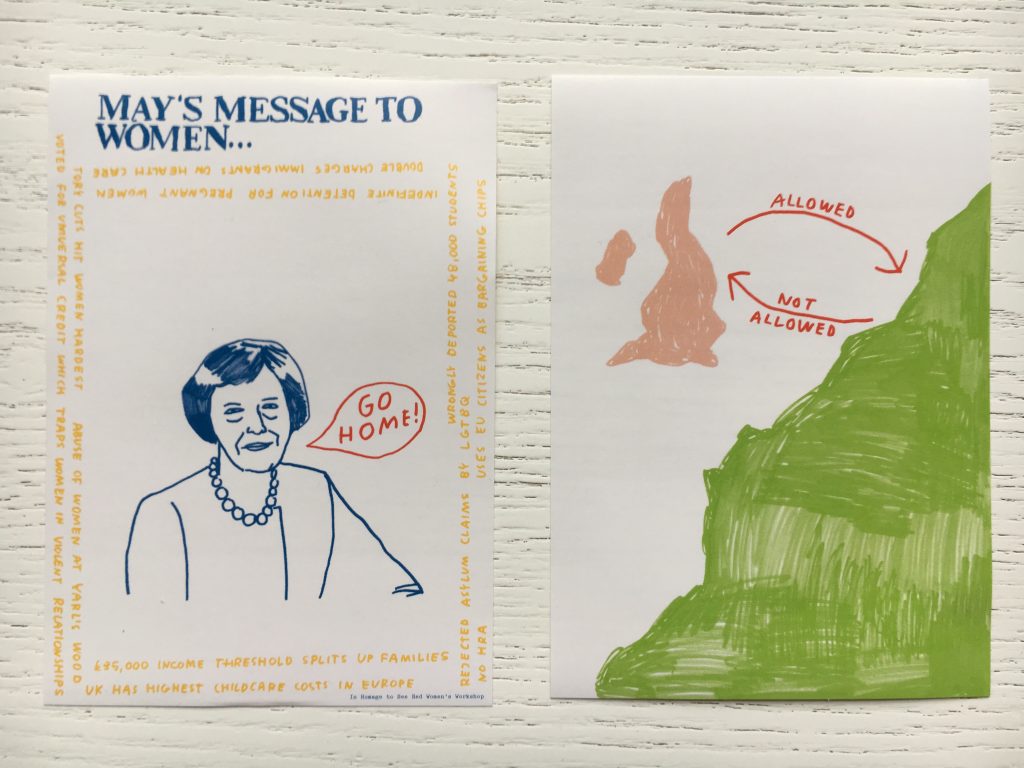 There is a changing understanding of the image of foreigners and the ways in which race plays into this. For example, there has been little problem with west European migration and Caucasian immigrants. These people, alongside Australians and Americans are not nearly considered as threatening to the “British way of life”.

Migrants are only seen as problems and are rarely able to represent themselves in the media. Migrants of colour are only ever portrayed through extreme victim stories or extreme success stories. Brexit and Trump politics want us to simplify and divide migrants into “good and bad migrants”, this sort of gross generalization is incredibly dangerous.

State sanctioned ignorance – you can afford not to care

Migrant Voice are combatting this by organizing workshops to assist immigrants in learning how to work efficiently with various media platforms. The aim is to teach people how to successfully access media technology. And do so in effective ways to express themselves and increase more migrant stories.

We need to speak for ourselves as migrants

The point of the discussions that stood out to me, was the emphasis that we, the liberal left thinkers and artists, needed to become more efficient. That to combat the elite people in politics and commerce, we have to stop talking and galvanize and mobilize more effectively.

So overall I was really impressed and feeling inspired with the comprehensive consideration to be conscious, inclusive and progressive. First the most part, I was motivated by the large variety of speakers and the ways they were tackling such complex issues of division in society.

However I had a lingering concern at the end of the day, which was that everybody attending “Unite Against Dividers” was on the same page, that each point and issue raised in the rooms were all points and issues that we all largely agreed upon and every one of us came from a background where we all wanted the same objectives and though it was wonderful to connect with like-minded people (which was one of my main aims for the day) that it inevitably felt like one was preaching to the choir, rather than actually instigating the change that we all desired. Regardless I took down names and notes.

For any more information about Unite Against Dividers, see the website link: http://makeitclear.eu/