Patrick Shields is a young Australian artist who currently lives and works in Sydney. His art practice explores the field between illustration and collage. The works usually feature detailed cubist-style deconstruction of human faces and often female heads.

GAPA: Where does Mongrel Dog come from? (Do you have a background in street art, if not, why the pseudonym?)

Patrick Shields: Mongrel Dog was originally just a way to distance myself from my work; I wanted the works to be self-contained without people drawing parallels to my personal context or personality. A mongrel dog is essentially a mix, drawing from any number of breeds but ultimately unique. That’s why I chose the name, to I guess acknowledge that no one comes from a vacuum, but also that I’m attempting to do something that’s my own. 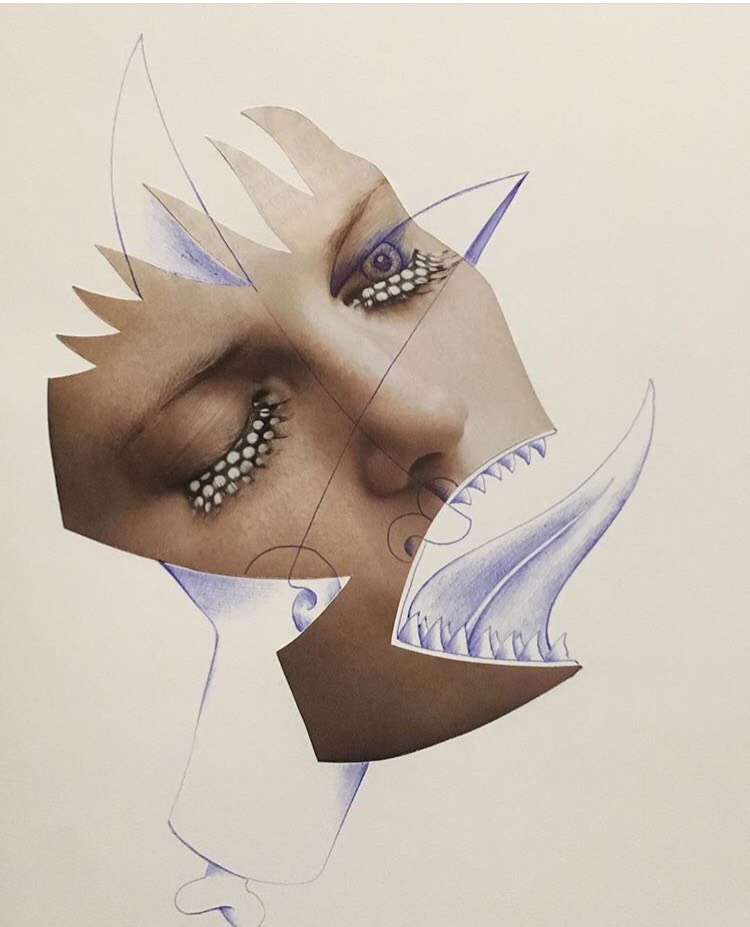 GAPA: How long have you been drawing for? And what were your early influences?

PS: I’ve been drawing for most of my life, early influences were mainly the classics like Picasso or Kandinsky, with a mix of more contemporary stuff like Reg Mombasa and Keith Haring. I like a lot of works with a high level of abstraction and bold lines.

GAPA: What type of illustration do you use (it appears like ball-point pens to me) and why? I found your recent aesthetic to be reminiscent of Sharpie Tags from a distance but in detail to be more comparable to Picasso’s cubism. Do you feel like this is on purpose?

PS: I use mostly bic pens or various pens, I like the immediacy of it and used to find the constant smudging and fading of pencil work frustrating. I think the way the pen shades flows more readily with the sort of angular way I like to draw figures and shapes. There’s also something innately more natural I feel when you work without sketching or drafting. 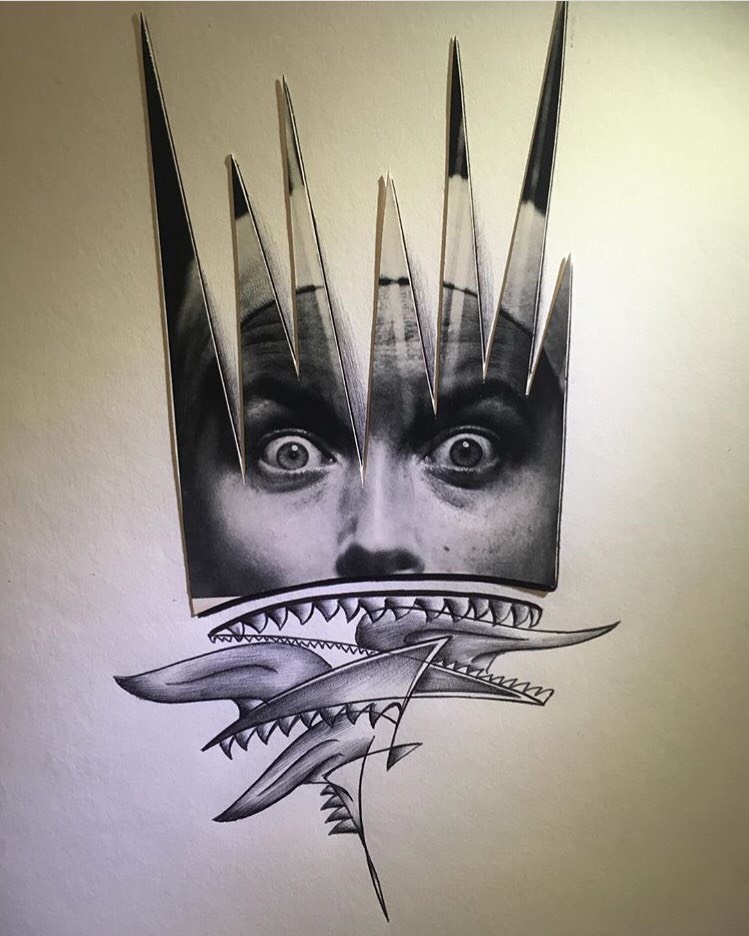 GAPA: When did you decide to introduce collage and combine the mediums?

PS: I’ve on and off played with collage for a while, but only recently focused on actively including it in my work. I was looking for a way to ‘ground’ my drawings, to give them a little more depth and character.

GAPA: Where does your interest in employing the female form stem from?

PS: A lot of my drawings I wouldn’t identify as essentially female. I often use female source images because I like the contour of the jaw and cheekbones more than traditionally masculine portraits, but not necessarily to depict any specific sex.

GAPA: You works give me a sense of violence and almost a feeling of disturbance in them, they remind me of Picasso’s women. Would you agree or disagree with this? Why?

PS: For a lot of them I’m more than happy for people to find their own meaning. There’s definitely a level of discord inherent in lots of my drawings, I try and take pre-existing facial forms and twist or contort them to display some sort of emotional ‘realness’. I don’t always hit the mark but my drawings are still very much a work in progress.

GAPA: The collage pieces appear to be cut from fashion magazines. Why did you choose to appropriate specifically white/Caucasian fashion models?

PS: I didn’t, actually. They just happened to be the most readily available in the old magazines I picked up at my local bookstores, which is possibly more an insight into your classic vogue magazines than anything. I don’t think of racial undertones at all in my work, they’re more about shapes/forms and creating some sort of emotional response rather than the colour of their skin.

GAPA: I find your illustration aesthetic also invokes a revival of 1990’s subversive style imagery like Reg Mombassa’s works. Do you feel that Reg Mombassa influences your artworks? If so, are there intentional alignments with to such a politically laden Australian iconography?

PS: I like a lot of that subversive Australianism. I used to be a lot more pointedly Australian in my drawings but my recent ones tend to be more neutral as I play more with form. A lot of my favourite artists like Mombassa are well known for using bold lines and shapes to convey a lot of meaning, and that’s something I would definitely hope to emulate, but I wouldn’t say my recent works are politically driven. There’s definitely a level of personal autonomy and freedom I find in the shapes that I make, and that level of freedom is always going to lend itself some sort of political voice. 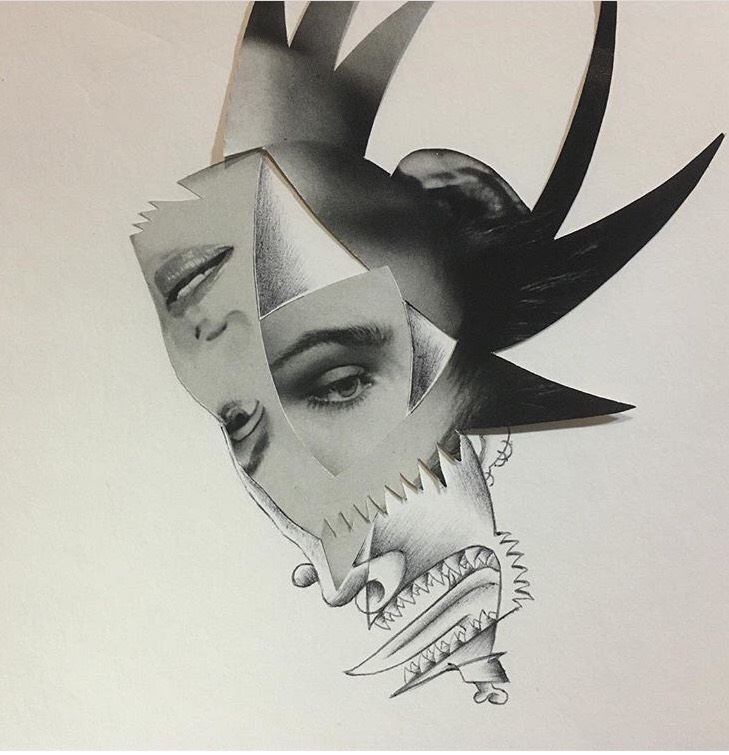 GAPA: How do you feel your works fit into the Australian Art scene?

PS: Haha a difficult question to answer, I would have no idea to be perfectly honest. A lot of the shows I’ve been to lately success really depends on how many free beers you’ve got in hand, so keep those flowing and everyone’s going to be fine.

GAPA: Are there particular social and political movements you affiliate yourself with? And if so, can you say how do these affect your practice?

PS: Not directly, I’m very big on personal freedom so most of the social and political movements I react to most strongly tend to be ones that impeach that. I think the huge surge of people campaigning for equal rights across the sexes / sexual orientations is amazing for example. In a way this affects my works as a lot of them deal with the idea of human commonality / equality, using abstraction to reduce the level of definitive shapes or features and put the focus on hopefully relatable emotional grounds.

GAPA: What do your plan for your future artistic direction and when is your next exhibition coming up?

PS: I don’t have anything specific planned, I’m working it out as I go along and look at lots of my works now still as stepping stones to something worthwhile in the future. I have a new show in the works but no concrete date set just yet. 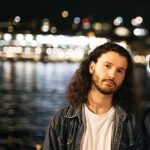