I have always been taught to feel fortunate for being a Lebanese woman in the Middle East. Indeed, just like any woman from every corner of the globe, I have fallen victim to my significant share of verbal sexual harassment from a significant number of ill-mannered men on the street or at your average checkpoint; however, what were such minute and insignificant incidents in comparison to the harsh circumstances which women across the Middle East live in today?

How many times has a Lebanese woman heard that in comparison to other Arab countries in the region, she was fortunate to be able to enjoy inherent freedoms such as wearing whatever she pleases, driving, or – my personal favourite – travelling without a male companion?

Lebanese women have battled a male-dominated political culture for centuries

You see, the problem with living your entire life being deprived of what you are entitled to, is that once these entitlements are granted, they feel like privilege. If anyone knows anything about Lebanon, you know its system is as complicated as its people, and that its people are only as complicated as the system which protects and fosters this complication. The state of Lebanese women’s rights and political participation does not fall short of this complication, to say the least. 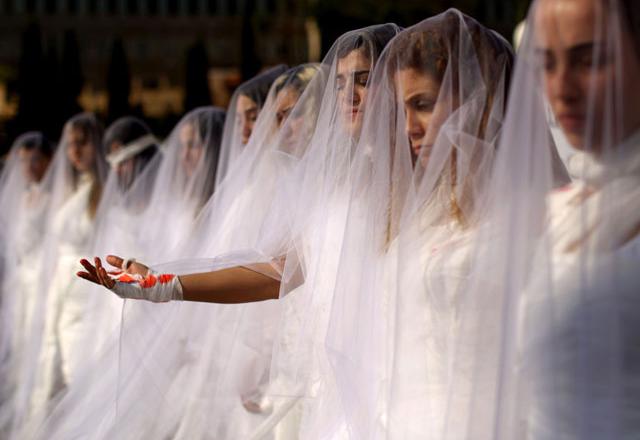 Male-dominated politics in Lebanon is an age-old realisation. Political parties focusing on sectarian interests and marginalizing women’s voices is another. This has been the case since independence, in 1943. Patriarchal political culture dominates the executive, legislative, and judicial factions of the country and ripples all the way down to the municipalities. This reality strongly persists through a rigid system founded upon hereditary politics, as the names which floated around in the early decades after independence still echo today.

All four of the women who won seats in the last Parliamentary Elections are members of elite families often entering into the political spheres with anything but little assistance and support from the men in their lives – a reality that not many Lebanese women are fortunate enough to be a part of.

This form of leadership has clipped women’s wings in political parties but has, much to civil society’s fortune, placed them at the forefront of non-governmental organisations across the country – a role that has proven to be more than effective in fixating women’s role within the checks-and-balance system in the country which is otherwise, evidently, failing.

To this day, and particularly after the Lebanese Civil War which ended in 1990, political parties are in a constant, semi-permanent competition to preserve narrow sectarian interests over national interests. Within a system which clearly does not have its own national interests at heart, women are less likely to be nominated or elected into any key positions which allow for change from the bottom up. 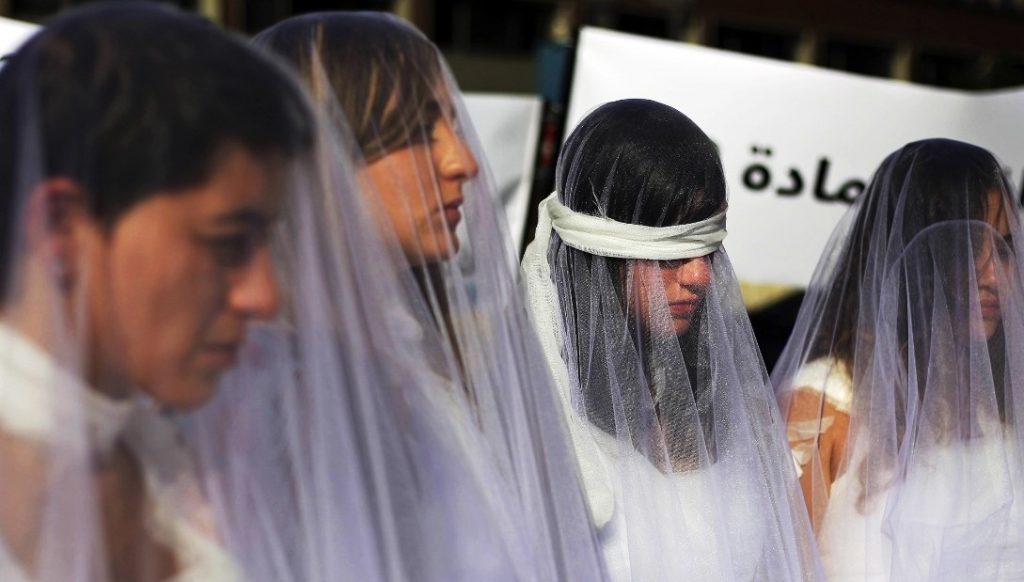 But, We Know All This:

Across all religions, Lebanon’s Personal Status Laws have erected (pun intended) greater obstacles for women than for men who wish to terminate unhappy or abusive marriages. This also affects the right to initiate divorce proceedings, to preserve the rights they have to their children post-divorce, as well as to secure rights from a former spouse.

Lebanon does have a Constitution. Its Constitution in fact explicitly guarantees respect for the “personal status and religious interests” of each individual, regardless of their religious denomination. This constitutional loophole is often utilised as a weak justification for keeping personal status laws under the exclusivity of religious authorities and in turn, eliminates the possibility of ever adopting a civil code ensuring any form of oversight over Lebanon’s religious courts and laws. Despite the fact that the 1936 decree that established the personal status order does recognise freedom of belief, granting each individual the right to abandon their religion’s personal status laws and marry under a civil code, Lebanon has yet to adopt a civil code overlooking campaigns since its independence calling for one.

To give you some necessary highlights, under Lebanon’s Shia, Sunni, and Druze laws, men have the right to demand divorce at any time, unilaterally, and without justification. On a side note, women’s right to access divorce is limited, and often after lengthy court proceedings. In principle, the laws do allow both men and women to have a clause inserted into the marriage contract which states that both the husband and wife have an equal right to a unilateral divorce; however, this right is hardly ever exercised due to social pressure and customs (yes indeed, more Patriarchy). Moreover, divorce is difficult for both men and women under Christian laws, but a key aspect of these laws affects women differently and unreasonably. Christian men can convert to Islam and remarry without divorcing. (Patriarchy).

Lebanon’s current system of personal status laws violates women’s human rights on hundreds of levels – this including its violation of basic human rights principles such as non-discrimination, equality in marriage and at its dissolution, physical integrity, and evidently, health. Ironically, these rights are all guaranteed in more than one international human rights treaty that Lebanon has signed and ratified.

The Bad News: It Isn’t Over:

For the modest scholars of the 21st century, women’s exclusion from the political process is a sign for civil society to up its game. Moreover, as modest International Relations students, we are highly aware of the fact that we cannot sit back and wait for our political system to be miraculously transformed overnight. Lebanese women have battled a male-dominated political culture for centuries.

On a positive note, the Lebanese educational system has ensured women are well-educated, financially independent and successful in their careers across all sectors – the reasoning behind why it becomes a “man’s world” when it comes to political affairs, to drafting and adopting laws and policies, and to decision-making about the welfare of the state and its citizens will always remain unclear. It has taken revolutions, wars, deaths and decades for even the women in what we call the developed world to overcome these obstacles, and sadly enough, within the realms of voting the Trumps and the tyranny into power, the battle is far from over.

Although everyone who has eyes, mind and soul already knows that Lebanon should pass an optional civil status code, reform religious personal status codes to end discrimination against women and protect children, and train and monitor judges and lawyers in religious courts to be more in tune with human rights standards, and to move away from laws that have preserved decades upon decades of discrimination, somehow, this has not materialised yet.

Being a Lebanese woman has taught me the distinction between the illusion of freedom, and its true embrace

Although civil society has made this clear for decades in parallel, and has urged the Lebanese government to exercise any form of oversight over religious courts and authorities in order to ensure compliance Lebanon’s international human rights obligations, these pleas have consistently taken a back seat to political and sectarian tensions.

The Good News: It’s Headed in the Right Direction:

On 7 December, 2016, the Lebanese Parliament’s Administration and Justice Committee agreed to abolish Article 522 of the Lebanese Penal Code, which exempts rapists from prosecution if they marry their rape victims.

Civil society and feminist organizations across Lebanon have been protesting the existence of Article 522, commonly referred to as the “rape law,” for years. This first step not only acted as invalidation, but also an improvement of the law for women and against rape in the broader sense. Although vaguely attributed to other organisations’ efforts, this was made possible by a powerful, tactical and lengthy advocacy campaign led by the non-governmental organization ABAAD (“dimensions” in English), which created a major pressure group and predominantly shamed the law onto its path towards abolition.

The law basically provides that in the event of a regular marriage between the rapist and his victim (yes ‘his’, not ‘his/her’, but that’s a whole other story. Also, Patriarchy), all proceedings against him shall be suspended and, if conviction is pronounced, the execution of the sentence shall also be suspended.

Not only does the campaign condemn this article as a violation of human rights, and particularly questions women’s dignity as human beings, but it also emphasises the obvious realisation that rape is a crime and as such must be punished. There should be no way around rape. Although, like everything else in Lebanon, no official statistics have been released about how many women are affected by this phenomenon across the country, around three women per week reported sexual abuse in 2016, according to the Internal Security Forces’ own data.

Article 522 has been part of the Lebanese laws for 70 years. Worth mentioning is the fact that Egypt repealed Article 291 in 1999, and that Morocco repealed Article 475 in 2014 just two years after a 16-year-old girl committed suicide after being forced to marry her rapist.

In 2016, 1,976 young women benefited from the Women and Girls Safe Spaces set up by ABAAD which opened their doors and hearts in 2015. These spaces provide psychosocial activities, psychological support, legal advice and representation, as well as emergency shelter for women fleeing violence or high-risk situations.

Following ABAAD’s successful campaign and event on the streets of Beirut, where women in blood-stained dresses protested the law exonerating rapists who marry their victims, sparking public outrage and provocation, the suggested amendments to the law have been submitted to the Lebanese Parliament for a final Parliamentary decision by the Administration and Justice Committee. The final decision for Article 522 to be legally repealed is currently on countdown.

You can watch the moving campaign trailer here.

You can watch the coverage of their event here.

Ms. Diab holds a B.A. in International Affairs and Diplomacy and is completing an M.A. in International Law from Notre Dame University-Louaize in Lebanon. She has experience both locally and internationally, having attended coursework, training and completed projects in Switzerland, Italy, Romania, Albania, Kosovo, The Netherlands, Turkey, Spain, Egypt, Japan, The United States, Germany and Ukraine.

Notably, she is the winner of the Mykhailo Verbytsky Award for Most Interesting Debate Intervention awarded by the Verkhovna Rada of Ukraine in 2016, as well as the Effective Presentations Award in International Criminal Law awarded by the Special Tribunal for Lebanon and The Government of the Netherlands in the same year. She currently serves as a Global Youth Ambassador to A World at School, a global Theirworld initiative.